What is Ceylon tea? Is Ceylon black tea?

You may think that Ceylon tea is simply black tea. But Ceylon tea is actually named for the area it is grown. Ceylon tea is grown in the highlands of Sri Lanka — a tiny tropical island smaller than the state of Indiana – and was referred to as Ceylon by the British settlers until 1972 when it became Sri Lanka. Although it comes from the same Camellia sinensis tea plant as other teas, Ceylon tea gets its full-bodied taste and citrus notes from its unique growing environment.

Because Ceylon refers to a region with such varying districts, many types of tea thrive there such as black tea, white tea, Oolong, and green Ceylon tea, with black tea as the most widely known. Tea produced in the Ceylon region accounts for nearly 20% of the tea in the world.

The Ceylon region provides large variations of elevation, soil type, and weather that affect the taste of Ceylon tea. Overall, Ceylon tea is known for its full-bodied, bold flavor. But depending on the elevation and soil, each Ceylon tea takes on its own unique flavors.

Black Ceylon tea is made from a fully-fermented leaf that provides notes of citrus, spice, and even chocolate. Oolong Ceylon tea has a fresh and mild flavor with a distinctive aroma and orange tint. Less processed green Ceylon tea retains the freshness of the leaf and tends to have a nutty flavor, while white Ceylon tea is known to be light and sweet.

While polyphenols are known for their health benefits, they also contribute to the tangy flavor of Ceylon tea.

How is Ceylon tea made?

Because Ceylon refers to the region, the processing method for making Ceylon tea depends on the type of tea.

As with other green teas, green Ceylon leaves are picked fresh and only allowed to partially ferment. The leaves are then rolled. The shortened fermentation period allows the green leaves to retain much of their antioxidant properties.

Black Ceylon tea is made from both the stems and the leaves of the tea plant. The leaves are allowed to ferment which reduces the antioxidant content. The fermentation creates a full-bodied tea and is often enjoyed as an iced tea.

This tea is between a green and black tea, being partially fermented and partially oxidized, giving it characteristics of both. Oolong tea goes through much more involved processing than includes withering, tossing, oxidizing, fixing, rolling, drying, and firing.

White tea leaves have a shorter harvest season and are carefully hand-picked. As the least processed tea, the leaves are left to dry in the sun providing a high level of antioxidants. Because they are hand-picked, these rare white Ceylon teas tend to be more expensive than other tea from Ceylon.

Does Ceylon tea have caffeine?

Caffeine can increase your energy, and make you more alert and attentive without the jitters you can experience from coffee. Consuming large quantities of black Ceylon tea can have mild to serious side effects similar to consuming other highly-caffeinated drinks. So if you drink tea throughout the day, think about alternating with a white Ceylon or green Ceylon to lessen your caffeine intake.

Different types of Ceylon tea have been linked to some amazing health benefits — from increasing fat burning to controlling blood sugar levels and decreasing cholesterol. Since tea from Ceylon can be green tea, black tea, or white tea, the benefits align with the type of tea instead of the fact of it being Ceylon tea.

Green Ceylon tea has been studied for the help it provides with losing weight by helping reduce fat formation while increasing fat breakdown. Green tea also give your metabolism a boost, which helps your body naturally burn fat more easily.

Ceylon tea contains potassium which is important for our bodies and plays an important role in heart health. Potassium can help reduce blood pressure and strain on your heart by relaxing pressure in veins and arteries. Catechins, found in green Ceylon tea, may help reduce the hardening and clogging of arteries as well as help lower LDL (the bad cholesterol).

Packed with antioxidants, the compounds in Ceylon tea help fight oxidative cell damage. A lot of research has been done on the role that antioxidants play in our overall health and protection from chronic diseases such as cancer, diabetes, and heart disease. By helping regulate blood sugar levels, green Ceylon tea may help reduce the risk of developing type-2 diabetes and help reduce spikes and drops in blood sugar.

Again those amazing antioxidants in green Ceylon tea are super heros when it comes to protecting your skin. Green tea can provide protection from UV radiation and slow down the effects of aging while also helping maintain collagen levels. Rubbing green tea extracts on wounds may help with healing and reducing scars.

EGCG (Epigallocatechin gallate) is a powerful antioxidant in tea that has been found to help protect the cells inside the kidney from toxicity caused by oxalates. By helping the kidneys rid themselves of toxins, the polyphenols in green Ceylon tea can help protect the kidneys, and possibly prevent kidney stones.

Studies have shown that regular consumption of tea can help improve bone density and strength, helping prevent osteoporosis. As a source of phytoestrogen and fluoride, tea may help to maintain bone density. However, high levels of caffeine can negate this benefit, so be sure to enjoy decaffeinated or herbal tea as part of your tea routine.

Now that you know more about what Ceylon tea is, go find a rich blend and enjoy a cup of Ceylon and all the flavor and health benefits it offers.

10 Best Supplements for Men How much loose leaf tea per... 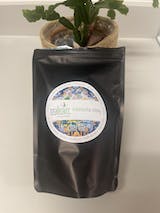